Whatever you may think of Lance Armstrong, the Tour de France, which takes place every summer in July, is an absolutely grueling endurance test.  Three thousand, four hundred, ninety six kilometers…that’s 3,496 km! (2,173 mi), pedaled over 3 weeks, up mountains, down valleys, through small villages and across France…I am exhausted every time I watch it.  These men cycle all year in preparation for, what I would call the ultimate competition of strength and perseverance.  I watch with great enthusiasm as I learn the names of the individual cyclists, pick a favorite team, open my fridge and reach for a bottle of cold water as the thirsty, pedaling cyclists reach for theirs, held out to them by a team member standing along the road. 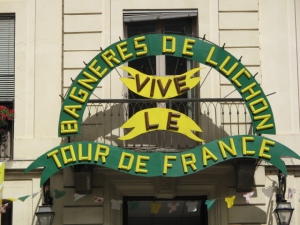 But I want to talk about a different kind of Tour de France…the kind not relegated to elite athletes or needing months, nay, years of training.  I’m talking about the Tour de France centered in the wine country of southwestern France, sharing a border with Spain along the Pyrenees, from the Mediterranean to the Bay of Biscay…

We like to keep our wine choices simple…yes or no.       Shopping in most American grocery stores or big wine stores you can search by country, and that normally will be as specific as the bin marker gets.  (Side note:  As we found out in Spain, the geographic area of Rioja alone has over 600 wineries, so to say you are drinking Spanish wine holds little significance…one must be more specific about region and even town!)    American wines are sold by varietal; French by appellation and geographic region; and because of the abundance of both, exploring French wine is a new adventure every few kilometers.

(I am writing this post as part of a larger series…’In search of the perfect Turkey Day Wine’.  Like other endurance events, months of tasting and note taking go into this determination)

Wine in France, like other wine producing countries, is part of everyday life.  Many people are involved in its production, it is ubiquitous on lunch and dinner tables, cafes abound and people are loyal to a local terroir (try ordering a Bordeaux in Languedoc Roussillon…good luck)  And that is a GOOD thing.

It is Truly eating and drinking local in its purest manifestation.  People are so intensely proud of their products, which they often bring to market and put personally in your hands, that you can feel the  quality emanating from this endeavor.  But I digress… 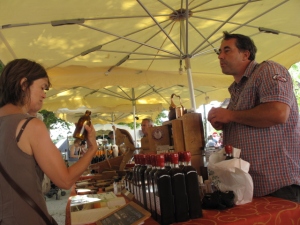 So, starting our journey in Le Boulou, in southwestern France, we drank only the local wines.  We had whites and reds from Chateau de Lacroix, in Cabestany, right up the road.

Another wine from the Languedoc Roussillon area, just to the north of Le Boulou that IS available in the U.S. is Saint Chinian.  Wonderful wine, small appellation.

In the southeastern corner, where France meets Spain, is the coastal town of Banyuls sur Mer where one can find beautiful examples of the sweet Roussillon wine called Banyuls.

This light Amber Banyuls may serve as an aperitif,  if there is any left.

These are both part of the reason we had to check bags on our way home from France!

Moving just north of the Languedoc area is the Cotes du Rhone…a large region that varies in quality, taste and price, well known by such appellations as Cote-Rotie, Crozes-Hermitage, Chateauneuf-du-Pape, Cotes du Ventous, Gigondas and Vacqueyras to name a few.  We had some lovely Vacqueyras while in France (thank you Rob and Barbara) and there are many that we have discovered available here in the U.S.  We recently had a bottle of Chateau des Hautes Ribes, Vacqueyras 2009 that was very rich and smooth and is now in the running for our Thanksgiving table.

Moving west along the Lot River, in Gascony we tasted a wonderful small-ish appellation called Madiran…Lovely!

We stayed at the exquisite Chateau de Projan

but more about that later!

and we had some of the most delicious reds we had ever tasted.  The majority grape varietal is Tannat…superb.

Some of the vineyards are small production, but others are larger

and waiting in the queue to be tasted for Thanksgiving (Domaine du Moulie Madiran 2008…I’ll let you know)  We carried one with us from France…another suitcase wine…and if it runs out to be a winner, well, I’ll volunteer to go get some more.

In the same area of Gascony we had some outstanding Armagnac (to accompany foie gras) and a very quaffable aperitif called ‘Floc de Gascogne’,  a wine fortified with Armagnac…fantastique.

Driving south of Gascogne, you pass through Cahors…lovely wine and fairly widely available here…perhaps too heavy for turkey…what do you think?

And south of Cahors, we stopped in Pau (Clos Mirabel…wonderful) which is home to the vineyards of Jurancon.

Although it may sound like this was a whirlwind wine tour, this is only a distance of about 200 miles (which we did at a snail’s pace of 3 weeks) and in those 200 miles were these AND MORE appellations.

The beauty of driving through wine country is that every few kilometers is a different appellation; a different wine beckons.

Whew!  I’m almost as tired as those cyclists must be after a ride through the Pyrenees!

That is MY version of a Tour de Southwestern France…much easier on the legs and lungs.

Please let me know YOUR suggestions for Thanksgiving wines…would love to hear them!

One comment on “A DIFFERENT Kind of Tour de France”