MANY interpretations of this week’s photo challenge.  After reflecting on some of them, I chose to go with an iconic image, which I took years ago, and wish I had a better, faster camera at the time, to capture the quickly changing expressions, and heart-thumping emotions that I saw.

These pictures were taken in the walled medieval town of Monteriggioni, near Siena in Tuscany, Italy.  While we were being tourists in this preserved fortress from the 1200’s, a bride pulled up in front of us, grabbed yards of wedding dress in one hand, while she stepped out of the car with the other.  I raced over with my camera to see her flower girl, giddy with excitement, trying to be helpful.  I captured the bride, as a breeze came along and lifted her veil.

Then, the bride and her father walked arm in arm into the church.    I followed them into the slanted doorway of this medieval church, and watched the Italian nuptials unfold.

You can see the crowds of tourists lining up to see the bride, entering this centuries old church, right next to the Ristorante Il Piccolo Castello.  (reception?) 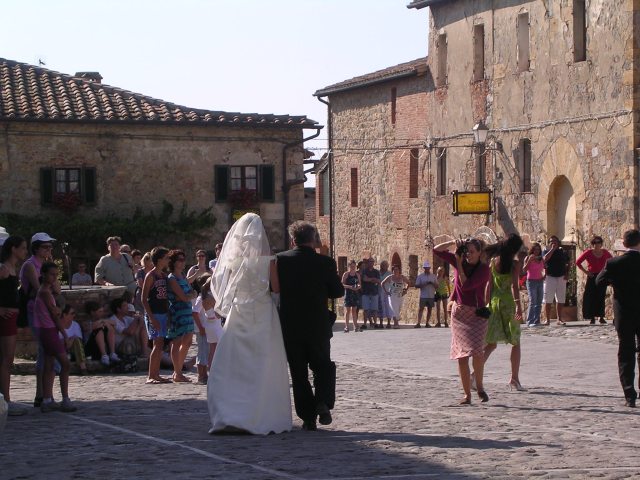 Bride and her father walk into the church, Monteriggioni, Italy