As they say in France, “Plus ça change, plus c’est la même chose”  (The more things change, the more they remain the same)

When we were very young, my brother, sister and I would pile into the family station wagon each summer for our annual road trip to…somewhere reachable by car.  My father got the greatest enjoyment out of stopping as we crossed the state line from Pennsylvania to New York and saying, “See kids…see how different it is here…isn’t it grand in New York State?”  We would look behind us, at the sprawling green hills and trees, look in front of us, at the sprawling green hills and trees, and slowly, eyeing each other for a spark of insight, mumble, yyyesss.

And onward to state lines up and down the seaboard.  (Was our entire road trip one big inside joke for my father?  Anyway, that’s a whole other story)

And So went the CHANGES we noticed crossing provincial lines and country borders between (and within) France and Spain…back and forth, hugging the border.  The signs signaled a CHANGE, not so the countryside. 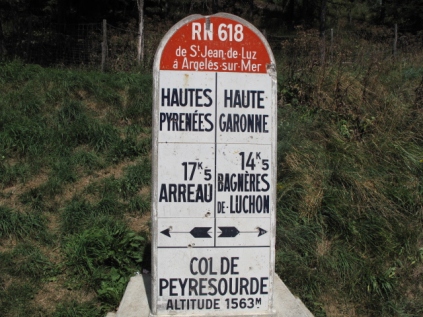 Route Nationale 618; Hautes Pyrenees, to the left; Haute Garonne to the right

Entering the departement des Hautes-Pyrenees. Crepe cafe in the background.

Entering France near the Somport Tunnel

Later that day, returning to base camp in Spain, along the same road

Prime Meridian! Difficult to see, but we even crossed the Prime Meridian…Surprisingly, I felt the same on both the east and west side
Advertisement