Lovely from afar, guidebook said the closest you can get is 4 km away…the rest is by foot.

But the guide on our walking tour of Montpellier said, standing on the top of the Arc de Triomphe (they have one also, and she has the keys to the medieval (read steep) steps up)…yes she said standing up there looking over the entire city of Montpellier on one side, quaint French countryside on the other…that is the beloved Pic St. Loup.  Cherished mountain of those in Montpellier and the Hérault Valley, watching over our city.  The north face is a 90 degree angle straight up, but the south face meanders and is a lovely walk for small children and grandmothers alike.

Ok, I’m in.  I fall in between there somewhere.

Wrong.  I forgot for a moment that the French are a hardy bunch.  And I would like to meet her grandmother!

The alarm goes off at 8:15.  I look outside and it is overcast.  Check the forecast…rain at 2:00.  Not good for getting stuck on a mountain top.  But Plan B…the Pic St. Loup foothills are full of vineyards and famous for their wine 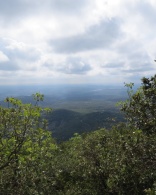 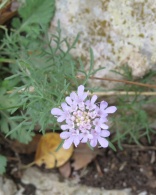 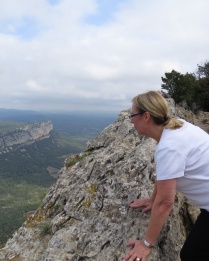 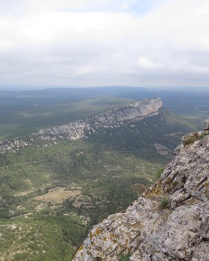 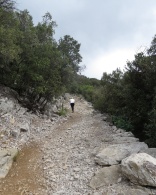 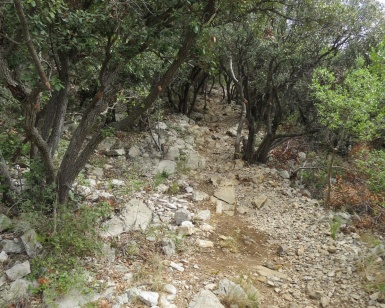 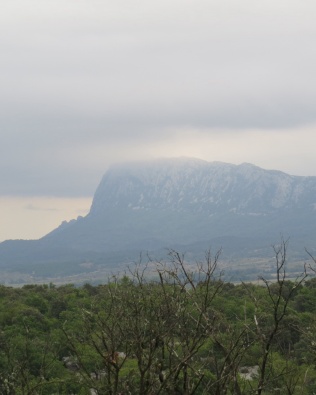 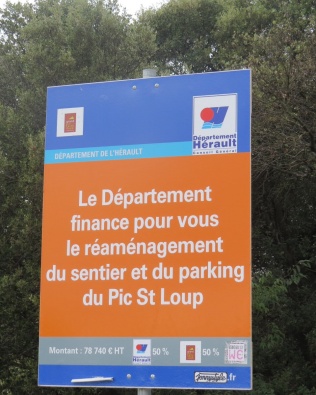 …dégustation here we come…excellent Plan B.  Do not say to husband, however, who is lacing up shoes, packing backpack, ready to hike.

Just in case, and secretly praying for rain, on goes a drop of mascara…can’t hurt.

Arriving at the trailhead of the mountain we park and assess.  Wine tasting will wait, we will hike!  is the unilateral decision made on my behalf by husband.  Clouds are way off in the distance…we are safe.

So, did I mention the French are a hardy bunch?  This ‘trail’ in the U.S. would be a lawsuit waiting to happen.  For a ‘trail’ someone took a rock eating machine and made vertical cuts in the boulders of the mountain, on a wind-y ‘path’, exposing the sharp jagged edges left after chewing it.  Then, they dumped truckload after truckload of small rocks…not pebbles, not stones…rocks spread on top of the jagged, peaks-and-valleys of exposed cut boulders.  To the right of the path, deliniating ‘go’ from ‘don’t go’ was barbed wire (make sure you fall to the left, away from the wire).   The paths were  marked…’beginners’ with a yellow line painted on a rock every few meters and ‘advanced’ with a double red and white painted line showing its way.  From bottom to top, everywhere we saw a yellow line, we saw a red and white line on the same rock.

Ha, you tour-eests…do not listen to the guide book!

Anyway, it was a good thing they had the barbed wire because we couldn’t tell the ‘trail’ from the not trail…except for wire.   They were both equally steep and equally covered with fallen rock.

As with any project in life, there is a tipping point after which you are committed and the only way is forward.

Husband repeatedly asked if I would like to turn around and go back after, he would say, multiple complaints on my part that went something like…I can take #@@$$%# steep, or #@**^%!! rocks, but not both!   That’s not complaining, that’s just fact.

But no, and no…we made it this far, we’re going to the top.

Exertion…sweating…forgot tissues…use t-shirt…mascara can’t hurt? It’s now running down my face in black torrents…sweating…exertion…triple our time at the gym when we get back home…

90 minutes and 4 kilometers later we arrive at Le Sommet…the summit.   And the sign at the top declared…’Ouf, vous y êtes!  You made it!

Yes we did…huffing, puffing echoing throughout the valley below, but we are standing at the top!

And the view was spectacular!

And the stillness at the summit…looking down at the farms and vineyards in the valley was breathtaking and wrapped in a longing to share.

The length of time you spend at a spectacular summit, no matter how long it took you to get there,  is directly correlated to the darkness of the rain clouds overhead.

1 1/2 hours to the bottom. And the eaten-up boulders with their layer of rock look different on the way down…still evil, but in a different way.

Parking lot in view…knees and back are crying out…home at last!

We met some hikers along the ‘trail’…the young ones vaulting past us whose legs seemed to be made of rubber were speaking German. The older, sure-footed ones passing us on the right, barbed wire side were French. Those must have been the French grandmothers our guide was talking about.