I chose to interpret this week’s photo challenge of the word UNIQUE as Michelle did, offering her submission of an open red tulip bloom in a sea of yellow buds…UNEXPECTED.

As I look back, my trip to Egypt, in itself UNEXPECTED, was full of UNIQUE experiences at every turn.

This is a country so rich with history and artifacts, many of them superbly preserved, that it is a wondrous and definitely Unique experience!

I think my first unexpected jolt was the Giza pyramids themselves.

Close your eyes, imagine…PYRAMIDS, and you are in the middle of a barren, expansive desert…correct?  Well, in fact, they are just minutes outside the city limits, visible from just about everywhere which shattered the image I had of needing a camel trek of several days to reach them.  It took us only 20 minutes by bus to reach the site from our hotel, and yes, if you turn your back on the city and look out over the plateau, the stately pyramids DO look surrounded by nothing but endless desert.  They are grand, mysterious, unique in every way…and city-accessible.

This shot is from the Giza plateau with the hazy city of Cairo BEYOND.

Another UNIQUE experience that brought reality to the icon, was seeing the Sphinx.  In my mind’s eye, it was as large as the Giza pyramids.  In reality, it is much smaller…still majestic, just much smaller than repeated stories made it out to be…Unexpected.

Unique juxtaposition of this ancient colossal statue of Ramses II, and the tiny tour guide giving him a closer look:

…and another UNIQUE juxtaposition is the ever-present souvenir stand side by side with ancient artifacts:

Another very Unique monument, among unique monuments, is the temple that Ramses II built to honor himself and his wife Nephertari, on the border of southern Egypt and northern Sudan.  Abu Simbel is spectacular in size and scope, and again, how well preserved it remains after all these centuries.

And something that is UNIQUE to the NILE region of Egypt is the felucca…a centuries-old mode of transportation on the Nile, dating back to the Pharaohs!

Here we are on a felucca in Aswan, a speck of sparkling blue water, surrounded by thousands of miles of desert…spectacular! 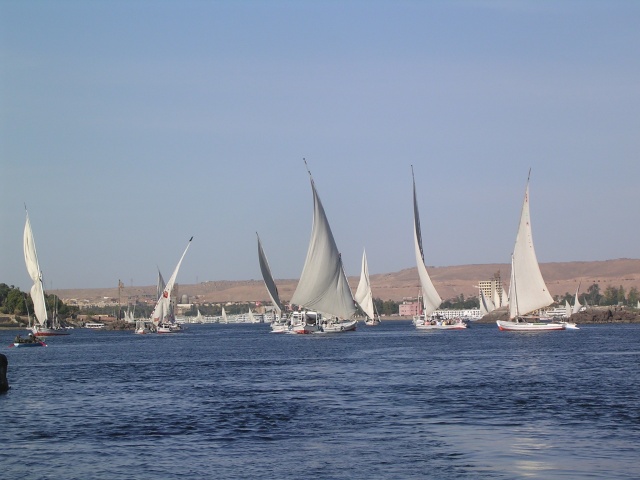 Felucca on the Nile, Aswan

And last, but not least, this brings a new and Very Unique perspective to the old adage of man’s best friend… 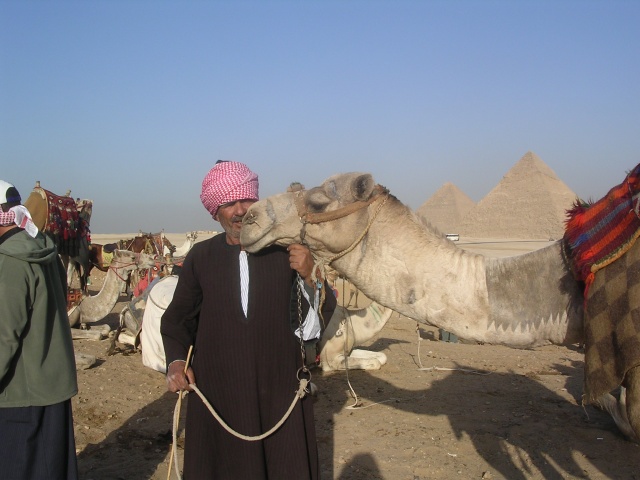 Man and his camel, GIZA